No Expertise in Interior Design?

Relax, We’ll Do It Together.

Working with first-time by Design customers is so much fun. When Rich and Kay came into the store for the first time, they were looking to furnish their family room. They had just put in beautiful new wood flooring so they needed some new furniture to complete the new look. However, the project was very intimidating. They told me they were by no means interior designers. They needed some help — some guidance through the process of creating a beautiful room. When I told them I was a interior designer and that part of our service was to come out and design their room, they were eager to get started. We dove right in.

They knew they wanted a deep sofa that was sink-in comfortable. They also wanted some type of window treatment because they had a huge window in the room that let in a lot of light during the day. Other than that, they had no idea what they wanted in terms of furniture pieces, layout, or color.

Rich & Kay’s aspirations for their room led me to our Vanguard Custom Series group. With it they could basically customize a sofa to their liking. It offers two different seat depths, as well as multiple arm, leg and cushion styles. The extra deep cushion was perfect for them. Once we found the right depth, we explored their style options. They homed in on an elegant (with a nod to traditional) style with a rolled arm and a turned leg. Because their room was so big, we were able to put both an extended sofa and a standard sofa in the floor plan. This is a room that will truly accommodate large groups. 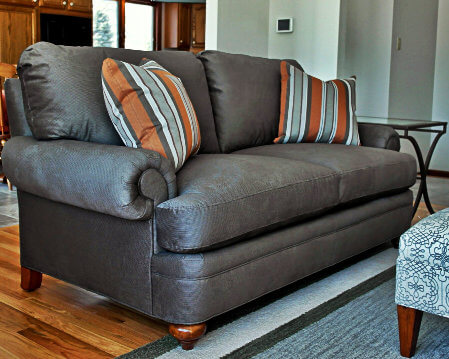 On the other side of the room we added the Victoria swivel-glider. The swivel was important. It allows the chair to be part of the conversation group, or to swivel and enjoy views of their Norwalk golf course. The Victoria chair has the same frame as our popular chair, Stephanie, but with rolled arm to complement the rolled arm on the sofas. Because this was a family room and the primary use was relaxation, I added a big ottoman with a fun pattern instead of a coffee table for feet-up comfort. 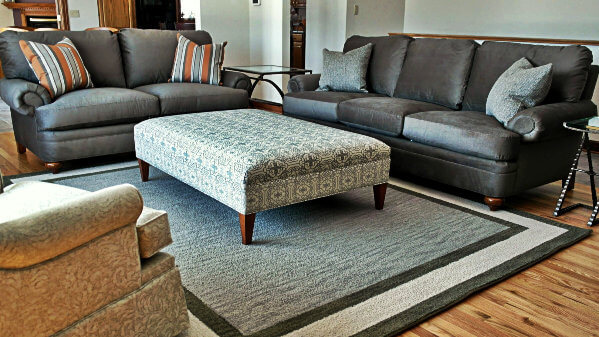 We put a big rug under the group. It adds a little bit of color to the room, but fades into the background allowing the fun ottoman to pop. They also had a China cabinet they wanted to put on one side of the fireplace but needed something on the other side to offset it. I showed them a storage console table. They were originally thinking they wanted something the same height as their China cabinet, but the console table with the clock above was a nice visual balance. They had some metal stools in the kitchen which inspired us to put metal end tables in the family room. This helped tie the two rooms together. 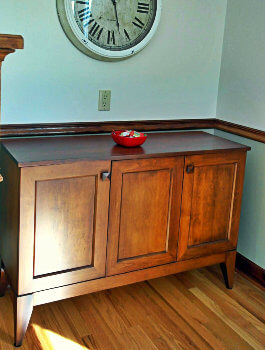 The finishing touch was the window treatment. They had a huge window with a great view of the golf course – but they wanted to have the option of closing it off for privacy and sun block. They also had a sliding door in the dining room that was right off the family room that they wanted to cover as well. Because they had the two windows I suggested a drapery in both rooms to keep it consistent. We went with a simple fabric to not interfere with the view.

When Rich and Kay’s furniture was delivered they were really happy with how the room turned out. Even their grandaughter, (who was hesitant about them putting furniture in what she used as her dance room) loved laying on the big ottoman. She asked if she could use it as a bed when she stayed over!

I really enjoyed working with Rich and Kay. Their room turned out great and I am so glad they are happy! 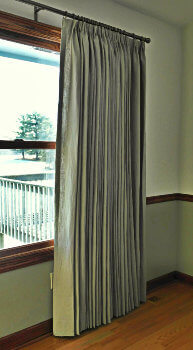